Cooking for one comes with a fair number of challenges, including how to use things that don’t really come in small quantities. Personally, I love butternut squash so much that I’m never stuck with ideas for what to do with ‘the rest of it’ (as I’m sure the large number of recipes that start ‘butternut squash something’ show!), but I’m always up for new ideas.

The ‘usual’ might be to start with a meal of ‘squoodles’, aka squash noodles, used as a healthy pasta substitute and served with pesto, roast peppers, and toasted pine nuts – and a hefty slab of garlic bread, since you can’t be too healthy 😉

There’s always soup – I’ve got quite a few listed. My favourite is probably the bnut and red pepper, although it’s less hearty than some of the others and so I tend to do it out of the winter season.

Generally, I’ll end up cubing and roasting at least part of the squash. It goes very well in salads, or pasta, and I’m a huge fan of putting squash into a risotto.

But, this time, we’re after something a bit different… And so I had a week of trying not one but THREE new recipes, all using the same squash.

First up was this butternut mac’n’cheese, which I was hoping would be a healthier (and maybe easier) take on a favourite comfort food. It tasted lovely, but my attempts at cutting it down to a single portion went a little awry and it ended up a bit dry. I’ll probably try it again at some point. Realised on serving that it wasn’t so far off the rather more successful ‘Easy Cheesy Pasta Bake‘, so perhaps I can find a working combination of the two.

Moving on, and one of my main ideas had been a butternut squash curry. This was relatively ‘safe’ – I just used bought curry paste, so it wasn’t going to be massively different from any other curry I’ve made – just, vegan 🙂 I ended up with three generous portions, so the rest went into the freezer, while a large amount went into my very virtuous-feeling tummy 🙂

Aren’t those colours lovely? I’d definitely do this again, and maybe for guests.

The piece de resistance, however, came from a want to use up some lasagne sheets. I love lasagne. I love my dad making it for me, as it’s a bit of a faff! What else could I do with it? Cannelloni! This was very experimental, combining ideas from at least four different recipes – and oh, was it good! 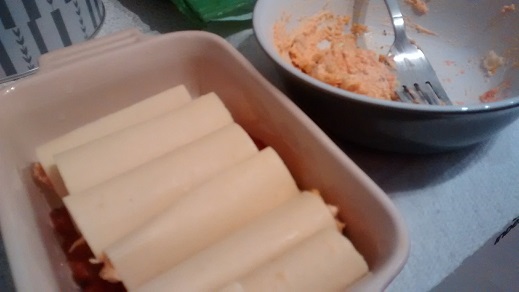 It did make a lot more than I was expecting – easily enough for 2 meals – but I highly recommend the second portion reheated the next day, as I think it was even better. I’ve read that filled cannelloni can be frozen, so I’d probably give that a go. Also, I’m going to experiment with different sauces – the tomato worked well, but I think a white or cheese sauce might be interesting, perhaps . Keeping the pasta moist was a little bit of a challenge, especially as I didn’t want to drown it in sauce, so perhaps a bit more pre-soaking?

This one is going into the regular rotation, methinks! 🙂

Oh dear – I’ve managed to wander off again from this site, haven’t I? Cooking has been happening, and indeed I’ve had a minor foody revolution after taking some nutrition ‘lessons’! But apparently I don’t get much mileage out of salads when it comes to food blogging (which I should work on, next year, as there’s a lot to be said!), but now that the weather is heading back to autumn, we find ourselves back in soup season and boy, do I have a lot of soup recipes! 🙂

The veg of the moment has been butternut squash, and I’ve been using quite a bit in butternut and red pepper soup of late. However, as it gets colder I’ve been hankering after something a little more substantial-feeling, and I discovered this butternut and sweet potato recipe lurking in my archives – you know, I don’t even remember making this?! Time to rectify that!

This recipe is one that lends itself well to my ‘bung everything in a pan’ method. I was quite surprised not to be roasting the squash, but nope: all in the pan. I could call this “all the orange” soup: squash, sweet potato, carrots, and red lentils.

Once cooked, I was a little surprised to see a slightly oiliness to the soup – but I hadn’t bothered using oil, or softening the onions. Ah! That’ll be from the tomato puree! But, a little fat in your cooking isn’t bad, and indeed can help make the flavour react better on your tongue, or so I read!

This is a nice hearty soup, with a thick and satisfying texture. both from the lentils and the starches in the sweet potato. The mix of flavours has a sweetness plus a little bit of depth. I think it’d go very well with some ham added, maybe even some beans, if you wanted to make it a bigger meal. Experiment with the herbs used, too, as this is the main additional flavour and therefore quite prominent.

Ah, the Scottish weather: one week it’s sunshine and salad, and the next we’re plunged back into winter (week? Sometimes this occurs on the same day. Seriously!).

This soup is, in my opinion, a good bridge between the seasons. It’s the lightest, most summer-y soup that I’ve tried, nice and light and yet still warming. 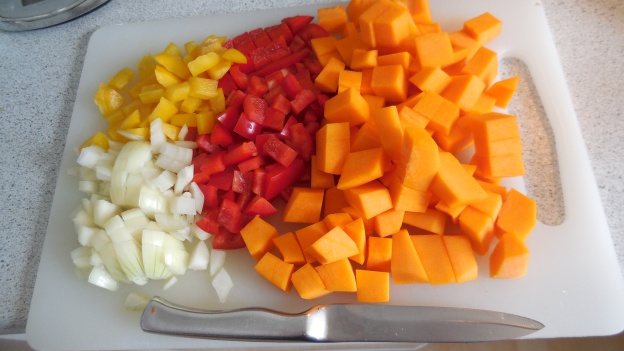 Despite the instructions in the recipe, I kind of forgot this time (I was having a bit of a binge-cook, and it got hectic!) and did my usual throwing everything into the pan – and it worked! You probably lose a little of the depth of flavour that roasting would give, but if you’re in a hurry then it’s an acceptable alternative.

I was using up the other half of the butternut squash (and a stray bit of yellow pepper, which went very well!) I’d used for the Butternut Squash and Bean Crumble, giving me half portions of each – so, three large portions of soup (although it freezes very well). 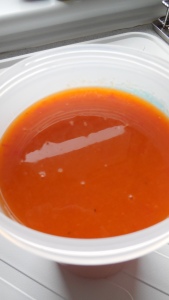 I’ve gone and bought salad for this week, so I imagine it’ll be snowing by Wednesday. Again 😉 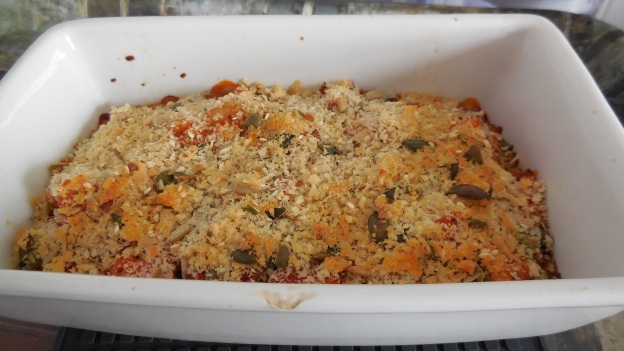 I’m not doing too well on the mix of recipes (or new recipes – yet!) as all these yummy vegetarian dishes have me looking up ones I haven’t tried in a while!

I’m not sure what’s taken me so long to make this Butternut Squash and Bean Crumble again, as it was absolutely delicious! I do love butternut squash, and the mix of the wine and tomatoes is a lovely base. The chilli surprised me a little, but it works – I used a level teaspoon, and wouldn’t want it any hotter. I might, however, have to try butter beans (lima beans, I think?) next time, as the cannellini were a bit small and inconsequential in the finished dish.

The crumble topping is one I intend to try on other things: the breadcrumbs went lovely and crispy, and my experiment of adding some mixed seeds (pumpkin, sunflower, sesame) added some lovely crunch and colour – I’ll be doing that again!

My one concern about this recipe is portion size. I remembered the first time I made this ended up with just HUGE portions (perhaps I misread the original recipe‘s 6 portions and thought it was 4?). This time, I halved the recipe – and please don’t worry, I have a great way to use up the other half of the squash! – thinking it would make four decent portions, instead of three huge: instead, I must confess that my version of the recipe gives more of a lunch portion than main course (although: perfect excuse for dessert!). I ended up eating 2/3rds of the half I cooked (the other half is in the freezer), and will throw some salad together with the remaining third for tomorrow’s lunch. 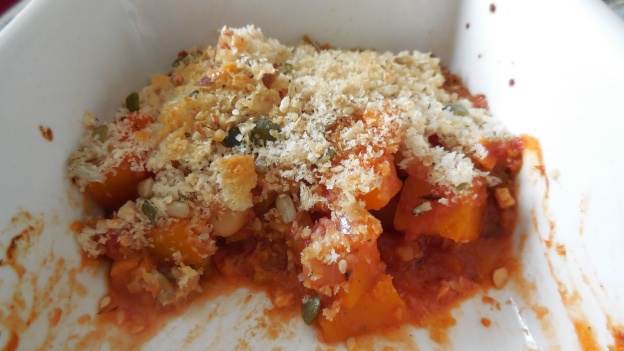 It was really hard to stop here and leave some for tomorrow’s lunch…!